The Presence of Honesty


Today I want to think about honesty and what that really means. Like the word love, I think it is used but abused in its real meaning.

We all like to think we are honest. But are we really?

Apart from the fact that Honesty is a plant in the mustard family, (with clusters of purple flowers and semitransparent, satiny pods) I'll go with the description in Wikipedia:

"Honesty refers to a facet of moral character and denotes positive, virtuous attributes such as integrity, truthfulness, and straightforwardness along with the absence of lying, cheating, or theft."

lets go with integrity, straightforwardness and the absence of lying as a simplified short form.

A great place to look at honesty or rather dishonesty, is around sexuality. This is where dishonesty is often most visibly played out. This cartoon is a good example of what I mean. But Sexuality is just a focus point,  the same dishonesty is occurring in other areas of life . 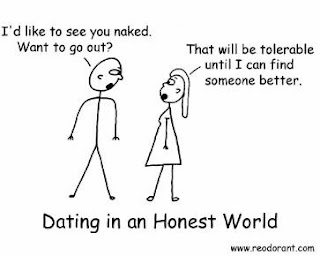 So why  is this the exception rather than the norm ? If people were honest, this would be pretty common, no ? and could you be this honest ? why not ?

Outside of the fulcrum of sexuality, this type of lying is happening every time you don't say or do what you feel in the present moment. In other words, the moment you avoid exactly what you feel, and say or do something unconnected to that truth, you have entered a state of dishonesty and are out of integrity with your real self.

Here are some common examples of this sort of lying that I am sure you see all the time:

- Buying gifts for birthdays or Christmas because its something you are supposed to do rather than feeling like it for a given person
- Finding someone attractive and hiding it
- Finding someone unattractive and hiding it
- Someone asks you how you are doing, and you say OK, when you are not
- Avoiding 'upsetting someone' - this is a big one. e.g Doing anything for someone else  because you think you 'should' when you don't feel like it. Or pretending to be interested in a conversation or person when they are simply boring you.

Going with the short definition, I hope all of these examples are clearly not honest, in  that they are not any of a) in integrity b) straightforwardness and c) with the absence of lying.

I think you will get from this already that adherence to our common social norms demands a fairly high level of dishonesty. I would go as far as to say being a 'normalized social creature' in the world demands you to be a compulsive liar. Add to this, the lying is policed by other members of society through shaming of anyone who 'comes out' as honest.

When dishonesty gets so well practiced and ingrained, you wont even know you are doing it. It reminds me of the native american phrase spoken of the invaders, 'white man speak with forked tongue...'

An important point I want to make is that how you feel in the present moment is an 'irrefutable truth'. There is no possibility of it being incorrect, none.  Sure it can change in the next moment, as long as that is true too.

The only way of dealing with this level of truth is through shaming someone for it.  And kids get it the worst, imagine how a kid would be shamed if they stated they were finding a teacher boring in class.

Obviously if a kid is yawning in the classroom, it is simply a true fact that the kid is bored, why is that made to be the child's problem ?

Making this in any way a child's issue is how we become trained in shame, our honest innocence as humanity is dehumanized. Only through shame training can we as a society be OK to maintain our existence as compulsive liars. (Parents are often complicit too, or they risk being shamed themselves)

Honesty is a state of innocence.

But we are learned to lie to avoid shame, instead of learning to admit to it, at the same time, we lie to maintain our shame. It is trained in from the beginning of schooling, it is our standard indoctrination.

Whats worse is kids are told not to lie while they are being taught to lie. This type of mixed message is the perfect way to destroy self esteem, building in a good heap of un worth of self, into the now forming 'self image' of a child.

You can link the amount of shame someone has with the amount of lying they do, and how much one feels to deserve to be 'who the really are'. Its obvious really, the least honest people will be those carrying the most shame.

Sadly I believe the extreme example of what I am talking about in relation to children seems to be a root of pedophilia, shame can reach such an extreme that it is acted out in some vain attempt to find purity

Also guilt and shame are linked. If someone has no shame, they simply can not 'feel' guilty. This I believe is the 'natrual' healthy state for a human being. Ie every human has a right to exist as who they are right here and right now. A clear antithesis for example with the christian doctrine of original sin.

If someone carries a lot of shame its easy to have them feel guilty for pretty much anything you want. Charities and religions play off this fact.

The example of this principal in action is do gooding. Any person or group that needs to be seen as doing or being good, is acting dishonestly (and will carry their own shame for doing so). Doing good needs no social sanction, wanting one (social sanction) proves you have no belief in your own action, you are acting against your true belief. Its dishonest.

The more I have understood this, the more I have seen it to be common in our world. A good word for the Dishonesty of honesty is Hypocrisy. Its a bigger word so I normally just go with lying.

It became clear to me that when this lying or hypocrisy becomes instituinalised, the institution itself that becomes the purpetrator. School is a good example of the perpetrator of our shame, but religions can often be more extreme. The most extreme example I can think of is how the Catholic church can state its acting for good while in reality is the worlds biggest known operational pedophile system.

The Presence of Honesty
I want to bring the discussion round to being present. As I covered in my love article (which is essentialy about honesty too)

So being truly honest means being present, they are the same thing. Its why I called this post 'The Presence of Honesty' thats what its all about.

The presence of honesty, in this case ideally your own, will expose the hypocrisy of do gooding, and/or spirituality in yourself and who and what else you relate to. In this light you can see any teaching that supports acts of dishonesty in your feelings, while teaching its 'good', is simply hypocritical.

JC was big on this hypocrisy stuff, probably a good reason they strung him up.

(actually i don't think its why they strung him up, I reckon its more because he went around telling people they were truly innocent. By saying 'your sins are forgiven' he absolved people of the shame and guilt that made them beholden to religions and control structures of the day. Its that that made his words dangerous)

I have had alot of fun with being honest over the years, it can take you to some very unexpected places and get some unexpected reactions. Sometimes the most honest thing for me to do when someone talks to me is to say nothing. That i found to be for me the most personally challenging, it's so counter cultural but so incredibly liberating to stay present and not have to make up words, when nothing feels true to be stated.

True honesty as opposed to hypoctical honesty which does not encompass your feelings is something I recommend if presence is an important goal for you.

And especially if health, happiness and longevity are things that matter to you, shame is not a good thing to be building up inside your body. If you went to school or church, I reckon its likely you have some to recognize and unlearn.

I don't think asking 'them' to change before we are prepared to look at our own lie is honest in this regard.

In my opinion, if a person is going to be really honest (in the way you describe it), it is also important that that person is a naturally caring and positive person. Otherwise it might not be so pleasant to be around that person.

And to me, being really honest does not mean you don't have to have any kind of respect for others.

For example someone like the wife of my really good friend here in Finland, she is a bit of the aggressive sort, and my friend has been feeling he and his daughter have to "walk on eggshells" around her.

Now the wife might be honest about how she feels, goes around complaining about things in the house because she feels that way about them, but that hurts others around her...

Same thing with a person that is depressed. A depressed person will see things in a much darker way than others. Maybe that is their truth right then, but do they really need to share it as it is, when they will feel different about it when the depression has lifted?

I also don't see the need for a negatively prone person to for ex at work say exactly what he or she thinks all the time, because that will make the whole work environment bad for the others.

So in a way what I am trying to say is that even if you are being honest, you still need to have good communication skills, love and respect for others in order to be able to work together with as a family and in professional situations. What do you think?

I actually think 'its better out than in' you can often feel when people are keeping this stuff in and hiding it. And its not so pleasant to be around. At least if someone gets it out there is something to respond to and say, hey i don't like that. It also gives them a chance to see what they are holding and to change it.

Our beliefs create our reality, they are the cognitive framework from which we experience everything..

Our reality (as perceived through our beliefs) forms the world we create to live in tomorrow, no one consciously does anything that does not fit their reality..

The beliefs you have are what brought you this world today.. you want a better world ? it is time to challenge and change your beliefs !

Ask most people to describe god, sit back and watch as they list their own idealised self projections.

Any human that believes any other human can define god for them, has the god vulnerability, they have chosen to be controlled by others and have given up their self responsibility.

religion is the hierarchical command system for motivating groups of humans which operates though the god vulnerability. A systematized herding mechanism, often based on guilt and fear.